Here was my mission: I was looking for something so I could go hiking or walking along the beach. But I want to have my camera with me, but when I go swimming (or something where I need to put my back down) I don’t want to leave my stuff unattended. 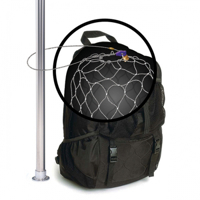 So what I had in mind was a smaller version of a military duffle bag (that really thick/tough canvas material) that you could somehow clasp at the top and lock it to a tree. Yeah, someone could cut through it, but they couldn’t just grab it and run (and they’d have to work at it).

What I found was the PacSafe DaySafe 100 Security Backpack, it’s way better than what I was looking for, it’s two (2) things in one.

The first is a backpack made for security, the zippers can be latched so someone can’t easily open it while you’re just walking down the street (the latches are hidden and hard to get to) and like a lot of luggage and you can (optionally) lock the zippers. It’s really comfortable too! Part of the main bag is slash-proof, it’s got a metal screen in the material, so someone can’t cut it to get stuff out while you’re wearing it. Plus, one of the straps is detachable and latchable so while you’re sitting there someone can’t just grab your bag if you’ve attached it to the table you’re eating at (this doesn’t work if you leave it unattended). It’s also got a few other options that they have to make it harder for someone to casually grab things from it. It pretty much looks like a regular backpack, it’s supposed to, they don’t want people to know you’ve got good stuff in it.

The second thing (and this is the important part) is that it is a DaySafe (they sell this as a separate product), the DaySafe is pretty much a small tote bag (17 liters) made completely out of the material with the steel built into it (eXomesh®). The drawstring is a metal cable that latches and locks (included with 3 keys) and is pretty secure. If you take the cable and wrap it around a tree (or a stationary object in your hotel room or rental car) before you lock it, it becomes pretty hard for someone to just grab your stuff and run.

The Daysafe is large enough to fit my 12 inch Powerbook laptop (with spare battery and charger), video camera, SLR camera, sound canceling headphones, iPod, small digital camera and other accessories and still seal up with room to spare.The safe fits inside the backpack perfectly and there is a special hole for the cable to secure the backpack too (the stuff in outer pockets would be at risk). I wouldn’t leave my stuff locked to a tree all day but for the bit that I want to go in the water at the beach (I stay mostly in sight of my stuff) it’s perfect.. 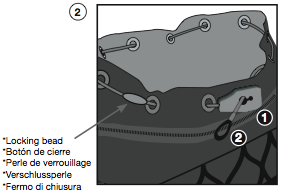 Or if I hike up into the hills to a waterfall, I can both take pictures and video and then go for a swim and not be too paranoid about my stuff. This would also be great if you need to leave your bag at the hotel because you’re too early to check in or need to leave your stuff because you have to check out but your flight isn’t for hours and you’re leaving luggage at the hotel for a while. You could just seal the bag up inside or even attach it to your bigger bag.

I also use it to just lock my stuff in my hotel room when I’m out and about (or lock stuff in the car). I attach it to the bed or a big chair so it’d be hard for someone to walk off with it and impossible to get in it unless they were prepared. Be sure not to have the bag locked while going through airport security, it’s pretty quick to use when you get used to it, but trying to juggle that and your shoes and belt might be a little tricky.

At their site you can see more of the PacSafe DaySafe 100 security features.

UPDATE: The’ve updated and renamed these backpacks to “UltimateSafe” and they sell the inserts separately which are called “TravelSafe” both are by Pacsafe.

I've been doing tech "stuff" forever and when I travel I like my gadgets with me. These are some tips that might make your travel easier from things I've learned.
View all posts by Gary →
This entry was posted in Reviews, Security and tagged 26 Things, DayPac, DaySafe, DaySafe 100, PacSafe, PacSafe DaySafe, Security. Bookmark the permalink.

7 Responses to The Security Backpack – DaySafe 100 by PacSafe – Review